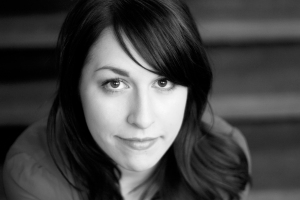 time I read this play it broke my heart and mended it in the same read.”

Jenna-Lee is a born and raised Saskatchewan theatre artist based in Saskatoon. She is a graduate of the Globe Theatre Actor Conservatory, and holds a BFA in Acting from the University of Saskatchewan. Jenna-Lee also co-hosts Mom, I’m a Thespian on CFCR, a radio show dedicated to local theatre.

What about this play resonates with you?

“The first time I read this play it broke my heart and mended it in the same read. It left me feeling exposed, but filled with hope. Reading about someone who, in a way, wakes up for the first time like Callie does; who witnesses the surprising, confusing, suspect way love sneaks up on you; who is shaken repeatedly by life, and circumstance, and their own fear, but keeps walking the tightrope anyway…well, it woke me up too. So, in a nutshell, what about this play resonates with me? The whole damn thing.”

What do you do to prepare for a role (or this role specifically)?

Jenna-Lee recieves an award… well, a prop one!

“Every role is so different that I find my preparation often changes. It’s like trying to find your way out of a maze. Left, left, right, left, right may have worked last time, but this is a different maze! You’ve got to figure it out brand new every time. This means lots of mistakes and getting lost (and maybe some flailing and crying) but eventually you find your way. Or else a helicopter comes and gets you. In this case, the helicopter is the director.

However, one thing that always sticks is finding the honest connection between myself and my character. What are our similarities? What experiences have we both had? What do they believe in? Do I believe that too? How do they treat people? When have I treated someone like that? In a way, preparing for a role is kind of like getting to know someone. You connect based on similarities, shared experiences, and spending time together. When the similarities begin to run out, that’s when the building starts. In real life you would hang out, and create new memories with each other. On stage, you’ve got to create these memories on your own. By doing so you’re creating a world so specific that even though it’s not based in truth, it feels as though it is.”
What does community engagement mean to you?

Jenna-Lee and Angela before a company meeting.

“I think a little community is formed each time 80+ people pack themselves into a theatre and witness a story together. Those strangers, whether they know it or not, are now connected through this very simple activity. The trick then becomes to keep that little community alive and engaged once the show has ended and it’s time to go home. I think this is what Charlie and Embrace Theatre have attempted to do by creating partnerships and relationships with different people and organizations throughout the city, adding post-show discussions, all which lessen the gap between “theatre” and “real life”. More doors are open for people to continue to be engaged by the story that they’ve witnessed, and they have more outlets to talk about the themes and messages that they’ve taken in. In this way that community can continue to be engaged once they’ve left the theatre.” 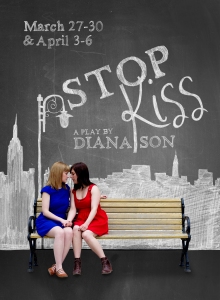 1 thought on “Meet Jenna-Lee Hyde, our Callie in Stop Kiss”