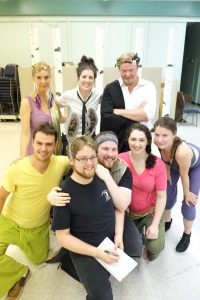 The cast and director of Bottome’s Dreame.

Congratulations to the Bottome’s Dreame Ensemble on their nomination for a Saskatoon and Area Theatre Award for Achievement in Sound Design! 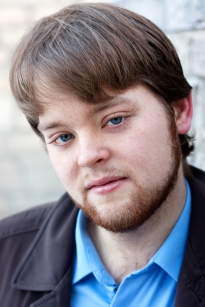 Charlie Peters is the director/actor/playwright/lighting designer/Shakespeare geek who founded Embrace Theatre. He’s also a cyclist, a sommelier, and a lover of cooking… but not of the dishes that you’re supposed to do afterward. He is excited to return to be back at the Saskatoon Fringe where he has performed, produced, and/or directed 8 shows over the years, the first at the age of 13!  Upcoming: directing Stop Kiss by Diana Son (Live Five – March, 2014).

Cheryl provides a soundscape for a scene.

Cheryl is an actor and a writer who has made her home in Saskatoon. She was last seen as Miss Prism in The Importance of Being Ernest at Persephone Theatre.  Cheryl has worked with various companies in the province and across the country. She was honoured with a Simpia award for best supporting actress in the film 45 RPM.  She lives with her partner Bruce McKay and two big puppies Keela and Brynn.  Bottoms up everyone!! I hope you have fun.

“Bottome’s Dream is a magical romp of love, desire and laughter!”

Chris Donlevy is pleased to be a part of his second Shakespeare production ever, his first sojourn into drag, and his second show as a 2013 BFA Acting graduate from the UofS Drama department. He’s also pleased that he can rock a dress. Recent: Carmen (Saskatoon Opera), Into the Woods (UofS Greystone).

“Bottome’s Dreame is a fast-paced, hilarious, and magical abridgement of the Bard’s A Midsummer Night’s Dream featuring Bottom and the Mechanicals, and the fairy King and Queen.”

Emma Thorpe is currently studying acting in the drama department, but in all likelihood will transfer to kindergarten next year. She enjoys tree climbing and making up gibberish words to songs she knows verbatim, as well as sometimes acting in plays. By night, she is an interstellar lemur. Enjoy the show, or don’t, she isn’t the boss of you. 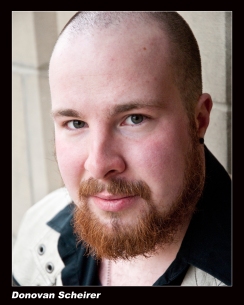 Donovan is enjoying the opportunity to play something completely outside his character range. An ass.

“This show has been such a fun opportunity to explore what is possible to do with music, sound and movement while working with classical text!” 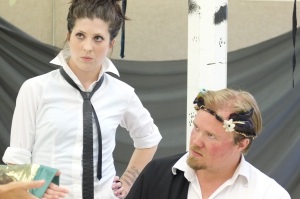 “So, a director says, ‘Let’s take the way we rehearse Shakespeare and build a play, bust it apart, put it back together again and see what happens? While we’re at it, let’s take one of the best known plays, smash out a third of it, and see what we can come up with.’ I say, ‘Sounds like fun!’”

Elizabeth Nepjuk grew up dreaming of one day 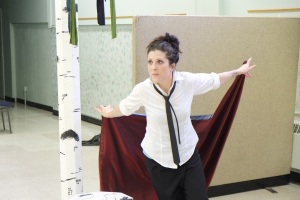 becoming a ballerina-football-shark. She ended up acting instead. A graduate of the Vancouver Film School’s Acting for Film & Television Program, and current student in the Drama Department at the U of S, Elizabeth plans on retiring rich at the age of 35. Upcoming: My Chernobyl (Persephone’s Season Opener).

“Working on Bottome’s Dreame has been an actor’s dream; I’ve never felt more free to be completely creative and it’s been a wonderfully nurturing environment to have been a part of. I love being encouraged to PLAY.”

Kate Herriot is the daughter of a birdwatcher and a birth coach, both in love with Shakespeare. Both her parents would die happy if she would just become a playwright already but nope…she just plays one onstage. Kate works and teaches in Regina and 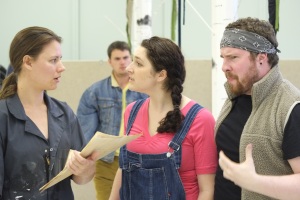 The mechanicals plan their play.

“Bottome’s Dreame is all of the spicy, dangerous, fantastical, bawdy, ridiculous parts of MSND without the lovers and their boring- ‘You don’t like me as much as I like you’ -business”.

1 thought on “Meet the Dreame Teame”