ON HIATUS – Stay Tuned for Updates

One Hour. Your votes decide the winner. The winner gets a prize. Every Monday night. Oh, and did we mention that the plays are read aloud for the first time by volunteers from the audience? Awesome. Plus, each week, while the playwrights are writing, you’ll be treated to a unique theatrical presentation.

Want to read an article on Scene Slam? Read The Sheaf’s write-up. 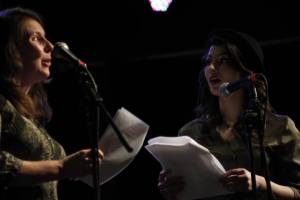 Who: You and three playwrights (which could include you – contact us if you want to slam).

What: A FREE night of theatre, including three brand-new plays written on the spot, and a different piece of live theatrical entertainment each week.

Why: Because theatre is awesome and you’re awesome.

Every night 3 new plays will be created and read, but what will happen while those plays are being written???

We’re on hiatus for the summer… check back in the fall!

Presented by Louis’ Pub and Embrace